The good thing about these models, is they are incredibly easy to build, plus you can enjoy them even if you're not a Guild Wars fan.  You can put some sweets inside while you build, & give them as actual gifts.

Continuing on with my Guild Wars Homage.  These are the penultimate GW themed paper goodies.  Most players will have come across all of these items, & probably received a good few of their own.

Gifts were always very cool to recieve while playing, & there were numerous ways to get them.  Seasonal Events, Character Birthdays, Daily Quests etc.  & I for one will miss them (Hoping for similar things in GW2) so here they are for you to build & keep as a memory of a favourite GW moment. 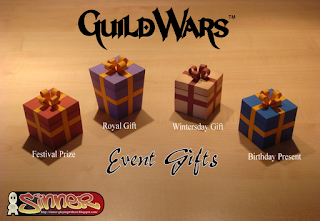 If you like these, or any other of my toys, tell your in game friends to come and visit my site.  After all, I do this for fun, & I want to share with as many people as possible.

Download your own set of GW Gifts Here
Posted by Sinner at Tuesday, July 31, 2012 No comments:

After having a look at a lot of Items & objects in Guild Wars, I decided on a few that I will reproduce as a Paper model, as a Homage to the game I've spent the last 6 yrs playing, & also something for fans to build & have on there Desktop to remind them of the good times spent in GW1.  Here is the 1st item, keep an eye out on the blog for the others to follow soon.

The release of Guild Wars 2 on 28/08/12 will mean most players, including myself, will be spending a lot less time in the original saga, & concentrating on exploration of this new Tyria.

Good times were had in one of the Elite areas called Domain of Anguish.  A place made up of 4 areas, that upon completion of each one, allowed you to take on the big boss Mallyx.  One of the other reasons to go there was the Gemstones.  Collecting 15 of each gem type (1 type per area) gave you an Armbrace of Truth from a collector, which could then be traded for a Tormented Weapon... but... enough about the game, let's get to the paper. 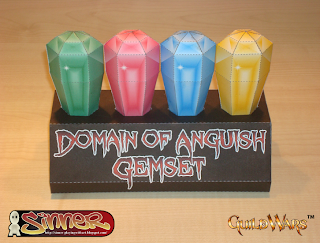 I decided a stand would work well with the Gems, as otherwise they would just be laid around loose & not be displayed very well.

I hope you will enjoy building & displaying these Gems on your desk, as you're playing at the start of a new era in the Guild Wars story.

Download your own set of DoA Gems Here
Posted by Sinner at Thursday, July 05, 2012 No comments: 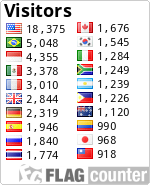